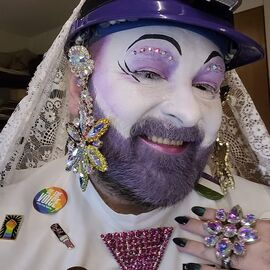 ​Sister Fagatha Hardness (O.J. Duncan) has been working as a queer activist for over 20 years. He started in high school by coordinating a candlelight vigil for Matthew Shepherd. Since then, they have served the community in a myriad of ways including serving on dozens of task forces and committees, being in various roles of queer organizations, starting a GSA at their school, and marching in the streets whenever possible. He is currently the Chair of the Board of Directors for Rainbow Café LGBTQ Center, and the Abbess for the SOIL Sisters. Fagatha first encountered the Sisters of Perpetual Indulgence at Pride in Chicago in the late 90s. He was enamored with their irreverent wit and especially how they queered religion. During a class about HIV/AIDS for his Women, Gender, and Sexuality Studies certificate, he wrote a short paper on the history of the Sisters, the Play Fair Pamphlet, and their role in providing support and comfort for queer people during the AIDS epidemic. Because it was in the middle of a pandemic, the opportunity arose to work on becoming a Sister with the Fourth City Sisters virtually. When he manifested at a southern Illinois Pride event, so many people were interested in becoming a Sister that he decided to start a house locally. When he’s not being a queer clown drag nun, O.J. is a PhD Student in the School of Communication at SIU. He specializes in Intercultural Communication and Pedagogy.