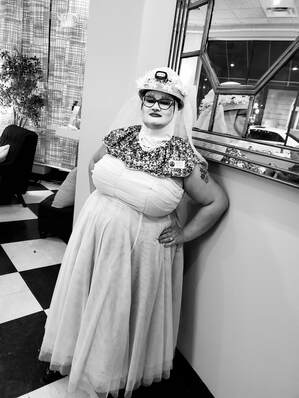 Sr. Kitty Sprinkles was raised in the South.  Living among those that were mostly Conservative, she never quite fit in.  Always on the fringe she would flit and flutter amongst different groups making friends with them.  As adulthood approached she was able to come out as pansexual and polyamorous.

One night at a gathering in the woods, upon a stage she saw a group of people in beautifully painted white faces and the most glittering of glitter outfits.  They were giving the blessing to those gathered.  This would set her upon a journey with the Sisters of Perpetual Indulgence.  She declared her Aspirancy in 2019 with the Fourth City Sisters of St. Louis.  Feeling called to help an aspirant house in Southern Illinois, she joined the SoIL Sisters as a founding member.

Her mission in life is to help others be their authentic selves.  Second to that is her mission of promoting safe sex education as well as the creation and distribution of safer sex kits to those in need.  Her ongoing project is Sister Storytime which will be returning in January after a short break. Blessings, love and joy to all.