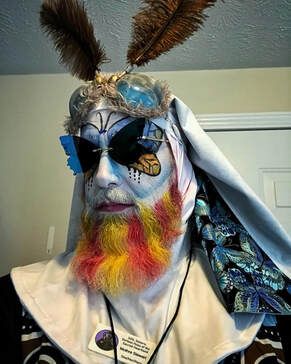 Jonny was given the faerie name, “Mothra,” by Sister Unity’s alter ego, Bennett Schneider, and Lord
Peregrine (Wiccan high priest, Michael Chávez) at the Gay Spirit Visions fall conference in 2017. At the
time, they collectively contemplated a drag persona named “Mothra Stewart.” Over the intervening
years, Jonny has been quietly crafting this persona, waiting for an appropriate occasion for her debut.
When the opportunity to help create the SOIL Sisters arrived, he knew Mothra Stewart was always meant to be a nun.

When he isn’t manifesting as the kaiju of crafting, Jonny is an Associate Professor in the School of Communication Studies at Southern Illinois University, where he has taught since the fall of 1999. His area of specialization is environmental communication with a particular interest in arts-based environmental advocacy. He is very active in the Southern Illinois community, including: hosting and producing “Isn’t It Queer,” a weekly LGBTQ+ news and talk show aired as a podcast and on local community radio, WDBX; serving as a Beloved Puppetista and helping to organize the annual All Species Puppet Parade; working with Rainbow Café; creating public performances in the Kleinau Theatre; and generally showing up as an advocate for environmental and LGBTQ+ issues.

Sister Mothra Stewart is committed to the serious play of doing good works for the community. She endeavors to inspire whimsy and the creative potential of all around her. She also understands we all need to be big about that, sometimes, like a kaiju. Because really, who wouldn’t come out of their shell when summoned by the singing voices of faerie twins? It’s a good thing!